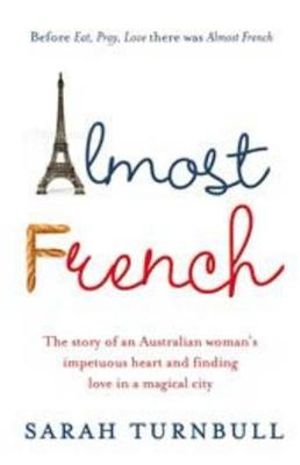 Paris may be one of the most beautiful cities in the world to visit – a city brimming with history, romantic opportunities and cultural wonder, however, there is a whole different aspect to living there as Sarah Turnbull reveals in her honest and endearing memoir Almost French.  Her story is not an uncommon one -a successful, independent woman’s plans to travel abroad for a year come to an unexpected halt when she meets an equally accomplished, charming and handsome man in a foreign land.  Consequently, a romance ensues and eventually the lady in question is invited to come live with her new love in his apartment.  When Frederik, the man in question, happens to live in Paris in a not too shabby apartment in one of Paris’ most central, chic and trendy quartier’s and market street neighbourhood of Rue Montorguil with an equally chic and sophisticated social circle to match life couldn’t be more enviable, perfect and simple for the lady in love or could it? Coming from a very informal and relaxed way of life in her home town of Sydney directly to the highly sophisticated, intricate and informal social culture of Paris, Sarah all too soon discovers that adapting to a city like Paris and being accepted by Parisians wasn’t going to be as easy or romantic as she had hoped.  An extremely apprehensive Sarah arrives to Paris with very little French and knowledge about French culture and is all too quickly thrown into the deep end of the cultural swimming pool trying to doggy paddle her way around and learning to decipher the new way of life around her.

With Frederick’s guidance and support, Sarah comes to terms with the fact that acceptance of most cultural nuances is key in order to remain dignified and survive the daily necesseties of life in Paris.  Sarah accepts that despite Frederik’s support some of her battles would have to be faced on her own.  In particular, the challenge of deciphering les Parisiennes – the women of Paris.  Sarah learns almost immediately about the female sub culture inherent within the overall social culture of Parisians and encounters, much to her dismay and disapproval, the perplexing, hostile and paradoxical nature of high society Parisian women and their lack of acceptance to female outsiders to their social circles.   After a few intimidating soirees that had left her in tears and some peculiar encounters made along the way, Sarah slowly begins to make more sense of her new city and life.  As the weeks and months roll by Sarah finds herself adapting more to life in Paris and as her love and understanding of the city and of Frederik deepens her life becomes enriched as a result and opportunities to enhance her career as a journalist and writer arise.

Sarah Turnbull leaves her rose coloured glasses behind in writing Almost French – a memoir that became a reading sensation about an expat and travel before Eat Pray Love came onto the memoir stage.  As a result, her examination and observation of  life as an expatriate is realistic and not diluted by the romance of living in a city like Paris. Her memoir takes us on un voyage of adapting to life in Paris with all its charm, beauty and cliches and coming to terms with its cultural complexities and deep embedded traditions accompanied by an unshakeable cultural pride.  Despite all of Paris’ prickles and warts, Sarah exposes the wonderful and alluring aspects of the Parisian way of life .  As we experience life in Paris vicariously through her daily explorations, rituals and shopping along the delightful and adored Rue Montorguil, we understand why Sarah eventually falls for the city of love and why travellers, in particular, succumb to the city’s allure and why Paris’ misgivings are forgiven time and again.